Enamel is a short fiction film project which offers a dark and fantastic exploration of housing rights in modern day Mexico City. This project is scheduled to shoot on location in Mexico City from December 19-22, 2016. Following the completion of the film in early April 2017, the team will host a screening and panel discussion at the J.A. de Seve Cinema at Concordia University. This screening will also include the program for two other short films by Concordia students, and the directors of all three projects will detail their challenges and successes in international co-production. 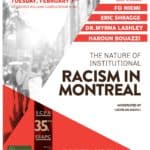 Nature of Institutional Racism in Quebec